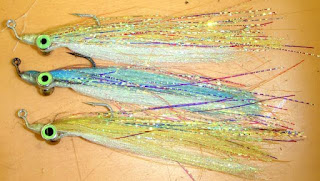 The Clouser Deep Minnow, or as it is more commonly known "the Clouser" is one of the finest Saltwater flies of all time. Even though Bob Clouser originally designed it for Smallmouth Bass, I think it's safe to say the Clouser is used more in the Ocean then in Freshwater.

We Southern California Surf Flyfishers have been using the Clouser for a long time. It's considered a standard for the beaches, plenty of us carry them in Olive, Chartreuse and Tan over White and in sizes #2 thru #6. They imitate various baitfish and will imitate Grass and Ghost Shrimp in a pinch.

I carry Clousers with me on the beaches, They worked well, but what always annoyed me was how the Bucktail in the tail would be ground off from simply being stripped across the sand. The Sand acts as little razors and would neatly cut off each hair , often leaving short stubble and the need to tye on another fly.
I started using synthetic hair and that improved the longevity of the tail and the overall fly. I used Super Hair, Craft Hair, Fishair, etc.. each worked well but I kept playing with new synthetics as they became available. Some I liked, others I didn't ...

DNA HOLO FUSION  is an interesting Synthetic winging material, it consists of fine, straight fibers known as "Frosty Fish Fibers" that is  mixed with fine strands of mylar, known as "Holo Chromosome". It has it's own built in flash and because the synthetic fibers are straight, not crinkled, you can make slimmer profiled patterns.. I started using the DNA Holo Fusion in my Clousers and liked the resulting pattern very much..

KRINKLE MIRROR FLASH is a Flash material marketed by Pat Dunlap's Cascade Crest Tools.  As described on the Cascade Crest Wedsite it's a 'Mirror Flash with a slight crimp, that mimics falling scales". This stuff is a lot brighter then Krystal Flash, so a small amount goes a long way.

By combining these new materials into the classic Clouser pattern, i was able to produce a sleek Baitfish pattern with a Ton O Flash in it...

The name Flashy Butt Clouser came about because in the Southern California surf we flyfishers can target the California Halibut  ( Paralichthys Californicus).. It's related to Flounders and grows to 40 lbs.  It spends a good amount of time in the Surfzone and the observant Flyfisher can have lots of fun fishing for them.  Halibut mainly feed on various baitfish and the young of other fish. Baitfish imitations, such as the Clouser are used to great advantage targeting Halibut.  but other patterns have worked well for me pursuing Halibut. Ken Hanley's "Gold Bucaneer" has been a favorite for years, it's flashy wing of Gold Flashabou probably being the key feature that gets a Halibut's attention... I learned from fishing the Gold Bucaneer that Halibut love flashy flies... the Flashy Butt Clouser was born from this knowledge.
The Flashy Butt Clouser has proven itself effective for Surfzone Halibut, fished in sizes #1/0 & #2 it does very well when the Halibut are in the surf targeting Grunion & Smelt...  But the "Flashy Butt' has also proven effective for Surfperch in the surf. and in the local Salt it's worked on Bonito, Mackerel and Barracuda. It has also proven effective on the local Calico Bass, when they are in the mode for really flashy flies. One species it doesn't work on is the elusive Corbina ~ all that flash scares the shit out of them... oh well...

Tying the Flashy Butt Clouser should prove easy for anyone who can tye a standard Clouser.. it's about the same tying sequence..

HOOK :  I have used the Eagle Claw 413 Jig hook and it works well. But I've recently been using the Unpqua S506 jig hook and have been happy with it as well.. I tye on either of these  types in sizes #2/0 thru #2

THREAD : Ultra 140 , white to tye in the eyes; Fine Mono Thread for the rest of the fly.

EYES : Hareline 'Pseudo Eyes', I like the Chartreuse and Nickel type. size the eye to the hook size.

~~~ I'll usually tye a half dozen or so to this point. Then I will coat the Belly and the fore and aft tye in points with a light coat of Solarez Thick (or similar UV resin) and then afterwards tye back in the Mono Thread to finish the fly ~~~~~~~~~~~~~~~~~~~

UNDER FLASH :  Krinkle Mirror Flash, Pearl.. about 10 to 12 strands, slightly longer then the tail

WING :  DNA Holo Fusion, I use the following 3 colors the most : Medium Olive, Sky Blue and Neon Chartruse

OVER FLASH : Krinkle Mirror Flash, depending on what color of DNA Holo Fusion in the wing, I'll use : Olive, Blue or Fl. Yellow. about 12 strands on top and slightly down the sides of the wing. keep the tips uneven...

finish of the fly with a tapered Mono Thread head. Coat the head with Solarez Thick (or whatever one you use) and then you're done...

Now you're ready to hunt Halibut , or whatever Saltwater species you wish to .. (except those scared Corbina... LOL!!)

Dean Endress
Flyfishing and Fly tying for 40 years. Teaching Fly Tying for 30 years. I love targeting Any Species that will eat a Fly. I love tying flies as it allows my artistic, creative Juices to flow...